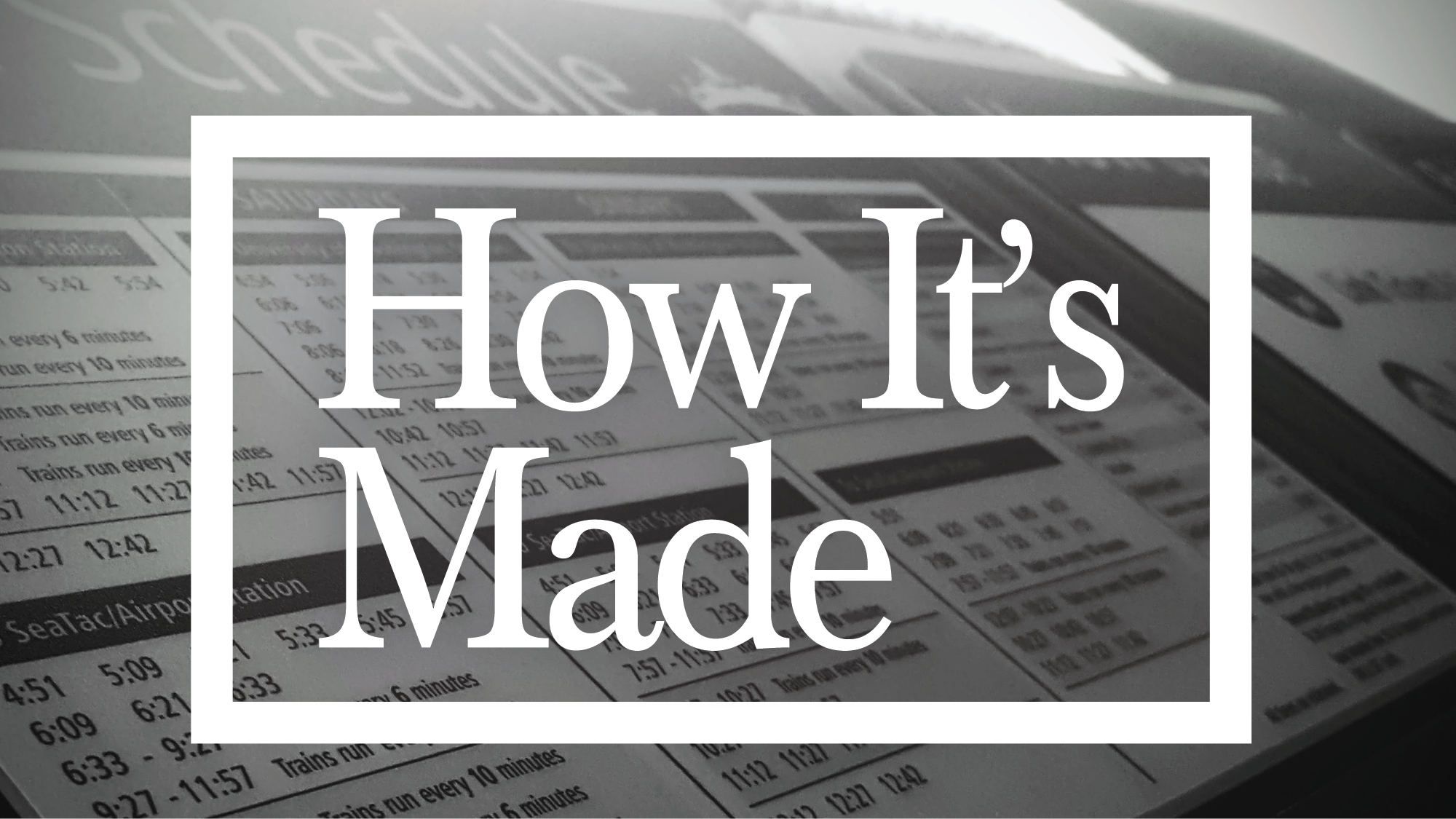 Public transit schedules started out and still are printed on paper. This means new schedules have to be printed for every change in arrival time or a route. But with the advent of trip planning apps, the humble paper public transit schedule is a new creation. It’s now a massive digital repository, which puts the world’s transit schedules at your fingertips. Despite the differences in scale, both types of schedules (printed and digital) are still made the same way: in a transit agency.

Traditionally, public transit schedules are made from a mix of travel times, desired route frequency, route maps, and other service characteristics. Planners work out service characteristics by first consulting with the public, operational staff, and decision makers. Planners usually use their judgement when setting input parameters, though some inputs may also be set by an agency’s service standards.

The following are the minimum service characteristics necessary for building a public transit schedule.

Once these ingredients are collected, they’re given to a scheduler who assembles them into a timetable. Timetables define when each trip is scheduled to arrive at each stop (or station). Specialized scheduling software is used to help schedulers create timetables. However,
very simple schedules sometimes rely on Excel instead.

Schedulers must create a timetable for every planned variation in service characteristics. For example, there are different schedules for weekday and weekend service. Another common variation is called an exception, which is used for changes in a trip’s start time (e.g., due to an early school dismissal).

In theory, a separate timetable could be created for every day of the week to refine for small changes in travel time. However, a unique schedule for every little variation would be 1) too time consuming to produce, 2) too confusing for the public to use, and 3) too overwhelming for transit operators. Timetables are therefore rough approximations of typical day’s traffic delays, ridership, weather, etc.

The shelf life of a timetable is dependent on how often the scheduler can update it. In agency’s with low scheduling manpower, timetables remain unchanged for years.

Timetables are essentially what the public know as a public transit schedule. But timetables must still undergo a few more steps before they can be used by the transit agency.

The timetable is then ready to be broken down and redistributed to a vehicle schedule in a process called “blocking”. Vehicle schedules are used to define when and where a vehicle will be throughout the day.

This was once an imprecise, labor-intensive, week-long process done entirely by hand, but now sophisticated software can accomplish this step is less than an hour for a mid-sized transit agency. Software also allows the agency to optimize the blocking process to minimize cost and the number of vehicles required.

But before the blocking can begin, the software needs to know:

Some software packages can also shift a trip’s starting time slightly in order to reduce the number of vehicles required in the schedule.

Now that the vehicles are accounted for in the public transit schedule, the transit agency must then assign work for their operators. This is done by run cutting. In the past, run cutting meant literally cutting blocks into pieces in order to create work assignments. Though this process is completely automated and optimized by software, transit agencies still use mostly the same terminology.

Just like in the blocking process, the software needs to know a few inputs before it can begin:

Once the blocks have been cut into pieces, they’re assembled into daily runs. These runs undergo another optimization process called rostering, which groups them into weekly work assignments called duties. Operators sign-up for duties at a sign-up (also called a “bid,” “pick,” “line-up,” or “shake-up”).

Because sign-ups occur periodically throughout the year, it regulates how often a timetable can be updated. Most agencies have sign-ups two to four times a year. This means if you wanted to have a timetable for every month in the year, you’d need 12 sign-ups. This is possible, but not very practical for operators and the public.

You now understand the basic four-steps of the public transit scheduling process:

With this overview, you have a new lens from which to view advances in technology such as self-driving buses, big data, and electric vehicles. I’ll talk about these “disruptions” and how they will affect the future of the transit world in an upcoming blog.

If you want to dive deeper in the the public transit scheduling process, you should read the Transit Cooperative Research Program Report 135: Controlling System Costs: Basic and Advanced Scheduling Manuals and Contemporary Issues in Transit Scheduling. It’s free, and a great resource.